Our criteria for comparing ergo keyboards

We explain how we looked at the existing ergo keyboards in the market, and what made us develop Moonrim II.

When we began the design of Moonrim II, we wanted to make sure that we were not reinventing the wheel. We made a checklist of what we thought to be important for an ergo keyboard design, and found that although many brilliant ideas have been tried, there was no single product that covered all of them.

Please note that we are the makers of Moonrim II, and our checklist is likely biased towards our own product. Nevertheless, we thought it would be good to share our own view so that more people can exchange opinions regarding what makes a good ergo keyboard, and the makers and buyers can both take hints from the discussion.

Also please note that we do not mean to attack the existing ergo solutions or their designers and users. On the contrary, we love most products we cover here. I’ve been a happy Keyboardio user myself.

The point is how each design solves an ergo problem in its own inventive way, and the accumulation of that enabled even better designs emerge. Moonrim II is willing to contribute to that progress. This is our take on the ergo challenges as a long-time ergo keyboard fans. What we want to do with Moonrim II is to add another (possibly good) idea to the already amazing community of innovative keyboards and perhaps make a progressive contribution.

Let’s take a look at what kind of options we had and what issues we saw that eventually led us to making our own. As far as we know, the oldest attempt of full-fledged ergonomic keyboard is the IBM British Patent. It introduced a keyboard/typewriter design that closer resembles the human hand shape than before, especially the curved face of keys that reduces the finger travel distance. Maltron and Kinesis came out later. They seem to be the first-generation commercially-available ergo keyboard with the curved design.

Later, there emerged a group of ergo keyboards with a similar idea that “thumbs can do a lot more than just pressing the space bar.”

Another group of ergo keyboards available in the market are more or less traditional, with certain features such as ortholinear key matrix, splitting the keyboard in half, and so on.

There are also ones so unorthodox that you wonder if they fit the definition of “keyboard” at all; They’re not even a “board.”

Some ergo keyboards are not commercially available. For example, DataHand shut down their business about a decade ago. Projects like ManuForm and 32xe, while being brilliant, are also not an option for most people who don’t have engineering skills.

Ideally, the device should allow the user to make all kinds of input without ever lifting the hand at all. This is obviously a major productivity/convenience issue, but not limited to that: It’s a health issue as well. With a liftful input device (some input points are not finger-reachable from the default position so you must lift your entire hand to activate them), the user has to constantly “look down” to check the position of the hand and the desired input points. This can actually cause damage to intervertebral discs and gradually (without the user noticing) induce the unintended “turtle neck” posture that is seriously harmful.

Traditional keyboards look absolutely uninterested in this. They would almost never question the nearly 150-year-old QWERTY layout and restlessly add more keys around them, ever worsening the reachability problem. We believe that, for an average size keyboard and an average size hand, even the Backspace is not reachable, requiring lift every time you make a mistake. This rules out nearly all items in the category 1 and 2.

Related to 1, it goes without saying that the introduction of mouse was the final nail in the coffin for liftlessness. Most keyboards don’t provide any mouse functionality at all.

By “uncompromising” we mean that the pointing control, without lifting the hand from the keyboard, can be as fast and precise as using a mouse, and it should be. As in some of the IBM ThinkPad laptop models, some keyboards do provide rudimentary pointing device function, but it’s far from being as convenient and precise as a real mouse.

It seems most keyboards simply ignore that fingers are not independent. The four fingers except the thumb (namely index, middle, ring, and pinky) are internally connected by tendons and ligaments. The pain of flexing or extending them to different directions is clear; repeating to do so may even cause medical conditions. 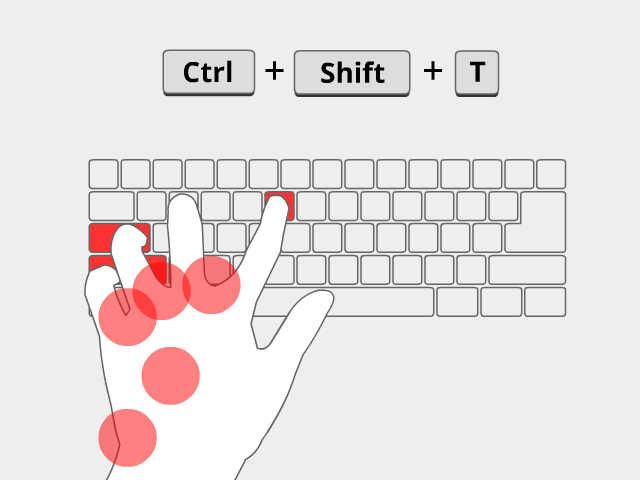 In Firefox, the keyboard shortcut for restoring a recently closed tab is Ctrl-Shift-T. The reasoning behind this is that since t is for “tab”, Ctrl-T opens a “New Tab”, and by adding Shift it revives a closed tab instead of opening a new tab. There’s nothing wrong with this.

The trouble is how keyboards don’t care at all about the fact that you always have to press the modifier keys (Ctrl, Alt, Shift, etc.) together with other keys. The finger twisting required for pressing Ctrl-Shift-T is ridiculous; You’ll notices whenever you try it, it stretches the ligaments almost to their limit. This is not the finger’s fault. It’s the keyboard’s fault.

We think it’s safe to assume that the absence of such tendon/ligament stretching is a must for an ergo keyboard.

This is what you do everyday with a standard keyboard because the keys at the corner are not reachable without twisting the wrist. The anatomical term for this action is ulnar deviation. Prolonged ulnar deviation can cause chronic wrist pain.

Muscles that surround the elbow can rotate the forearm: The forearm can be pronated or supinated. 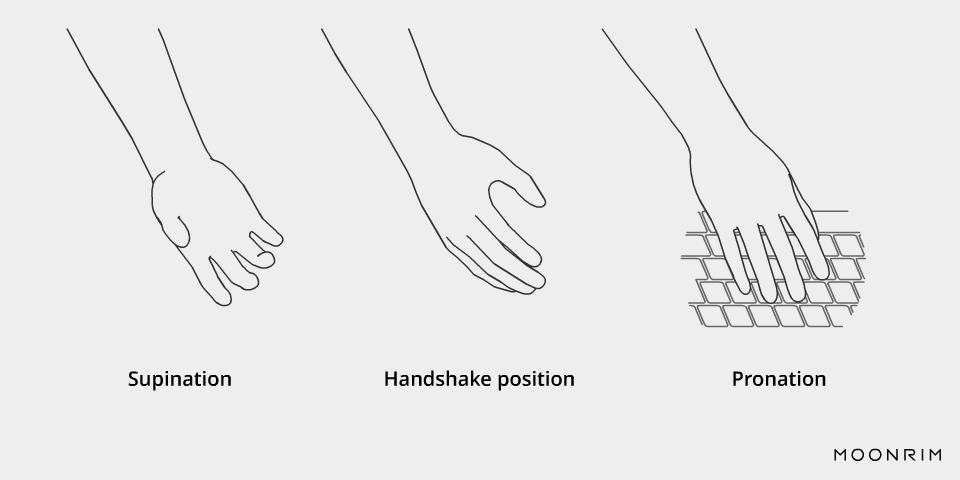 Traditional keyboards require the hand to be pronated. Prolonged pronation has adverse effects on the health of the user. The immediate problem is that the muscles and tendons are continuously strained for a long time. This causes stress and muscle fatigue, typically observed in office workers.

The bigger problem is that, when certain muscle is strained for a long time, human body instinctively tries to relax it by changing the position of other parts. The easy way to avoid the extreme rotation of the elbow is to lift the elbows outward from the body.

It feels better for a while, but this in turn stretches the muscles in the upper arm and the shoulder. The upper body is gradually pulled down and the user’s posture, without noticing, soon becomes the “worst computing posture.” 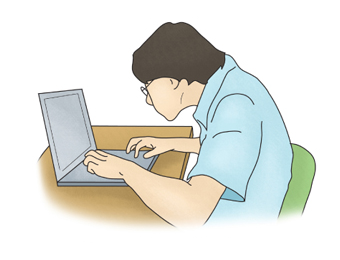 One thing we found in the ergo keyboard design process is that “sideways wandering” contributes much to general typing inaccuracy. On a keyboard, when fingers are traveling only up and down, it’s less likely to make typos. The chance of inaccurate press rises when the finger has to move left and right.

This can be explained with the anatomy of human hand. The part we usually call “palm” has four bones (called “metacarpals”) inside, and the finger bones (called “phalanges”) extend from them.

Each of the four fingers from the index to the pinky has three joints: distal inter­phalangeal, proximal inter­phalangeal, and metacarpo­phalangeal. Since they’re such a mouthful, let’s call these joints DIP, PIP, and MCP. Among the three, only one joint is capable of lateral movement: The MCP joint that connects the finger and the palm.

So, the lateral movement is executed with only one joint, with more effort and pain than the vertical one, and to a fairly small range of motion (about 20 degrees), This is why the lateral movement of the four fingers feels limited, awkward, and inaccurate, while vertically you can move them so deftly, delicately, and freely, with more than 180-degree range of motion. The accuracy of lateral movement is further lowered due to the long distance between the fingertip and the MCP joint (compared to the distance between the tip and the DIP).

This alone is enough to produce more typos, but since human body instinctively tries to alleviate the pain by moving other parts, the whole hand will shift slightly whenever a lateral movement is made. You’ll notice when, on a QWERTY keyboard, you try to alternate between F and G (or H and J), it’s not just the lateral movement of the index finger. The entire hand moves. This shift, in turn, offsets the hand to the left and to the right, and during a rapid typing, results in a constant mistyping or a slower typing speed.

We should either eliminate the lateral movement of the four fingers altogether or have some countermeasure. An example of such measure is DataHand which provides a “wall” that surrounds each finger, removing the chance of the finger ever “wandering.”

Thumb is a remarkably versatile finger with a great range of motion. It is the only truly independent finger that can operate separately from the other fingers without any pain or effort. It also has the unique ability to face the other fingers, enabling the “pinch” action. As a finger, it’s a high-resolution sensory organ as well, and that sensory function is maximized at where the fingerprint is.

None of this is meaningful for traditional keyboards. The function of the both thumbs is limited to pressing the space bar! Even the ergo keyboards with more “thumb keys” would still just lay more keys on a plane, and you’d have to press them with the “sideways” movement of the thumb.

Support for swapping certain keys (Ctrl and Caps Lock) is already a popular concept. Obviously there are more advanced changes that will make your life easier, and you deserve the freedom to rearrange the keys or even assign special actions to certain combination or sequence of keys. You’d expect to have this feature especially for ergo keyboards.

We admit that the checklist is our checklist: Diverse people have diverse needs, so you may have your own. Perhaps an ergo keyboard doesn’t need to meet all of them and still be perfect for some people. We hope that this post can serve as a starting point for you to review your own needs and find a keyboard that protects your health and boosts your productivity. Hopefully, in that process, you may consider Moonrim II as well.